Hello gamers! I’m looking at setting up a page for PC info. If you all could send me a quick intro to your character (Along with correct spelling of their name) and a Portrait pic of them, I can get that page up and done. 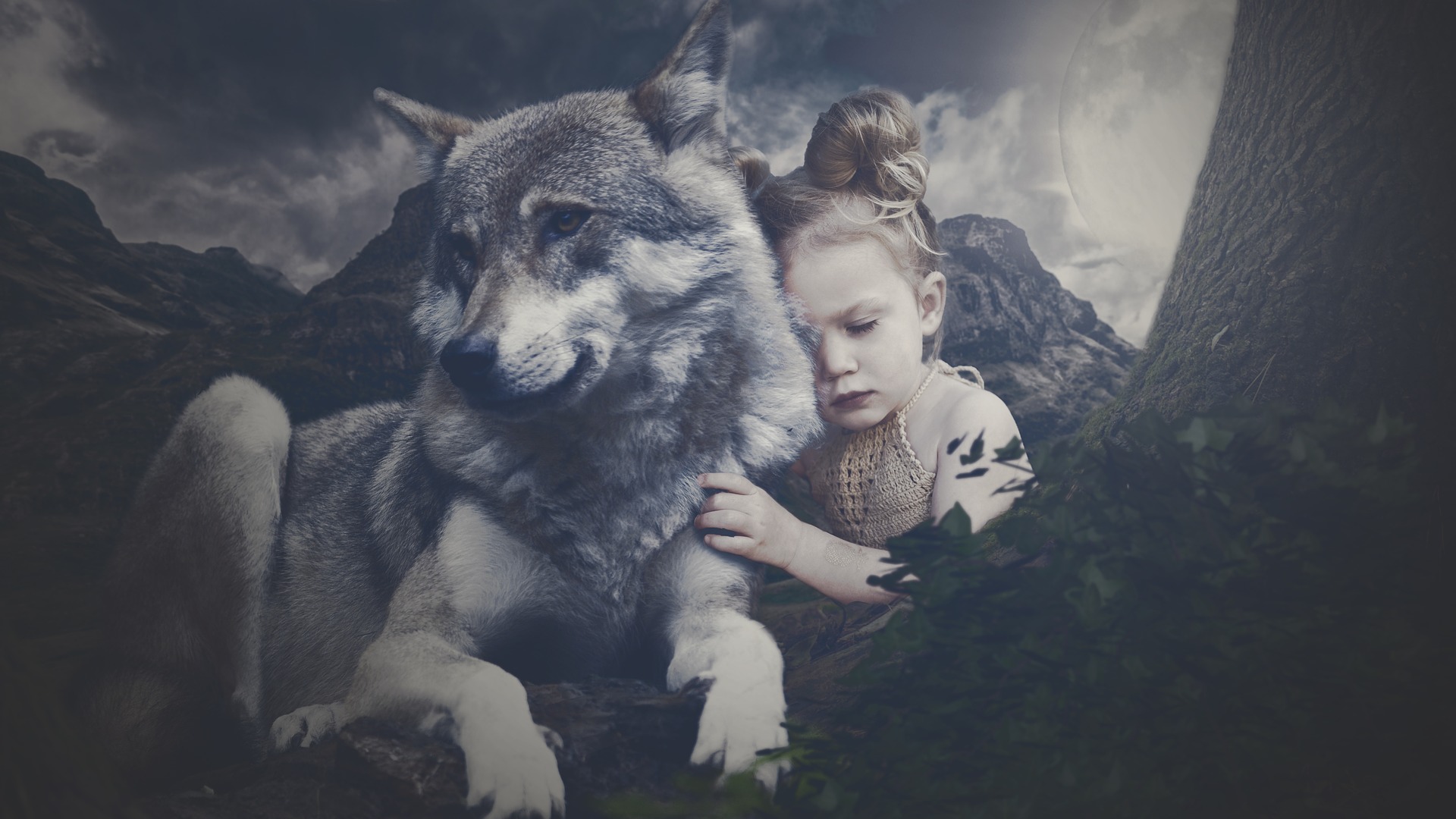 The character’s primary form is that of a timber wolf. The size and shape of the wolf generally matches the stage of development for a humanoid, rather than for a wolf. In other words, a five year old Child of Fenrir in their natural form would look like a wolf pup, rather than a timber wolf’s full grown adult status at 5 years of age.

The character can change to the humanoid form of a Child of Fenrir, or back to wolf form from humanoid. This is a simple Overcome skill roll using whatever either Physique or Will against a default difficulty of Fair (+2). Outside of exchanges, a roll shouldn’t be necessary since a character can just keep trying until she succeeds. How fast a Child can change may be important during exchanges — round by round encounters.

The humanoid form always looks the same, albeit normal aging occurs as the Child of Fenrir grows from child to adolescent to adult. Although they can shift as they will between humanoid and wolf form, they cannot use their shapeshifting to look like a member of another race. At least not without some special stunt or mystical power.

The humanoid form possesses slightly pointed ears, which can be hidden. Because of the ears, some confuse a Child of Fenrir in human form with a half-elf. However, when compared to real half-elves, the ears are obviously different. While a half-elf’s ears resemble a smaller version of the up-swept ears elves posses, Children of Fenrir have ears whose points are swept back in a more horizontal angle.

Fur and hair color matches from wolf to humanoid forms. this ranges from white to black with a variety of shades of grey, tan, ochre, sienna and brown in between. Hair in humanoid form tends to grow quickly, like that of their wolf form, but does not shed since in wolves, only the undercoat sheds, and that is present only in wolf form. Color can change some due to seasons, and can change dramatically as the Child of Fenrir ages.

Like timber wolves, Children of Fenrir are born with deep blue eyes. These lighten and gradually fade to their permanent color by the time of adolescence. These colors include brownish amber, but can include hues of brown, gray, yellow and green.

Because of the rarity of Children of Fenrir, it’s possible no one would know what the strangely angled ears and wolf-like eyes actually mean. In some areas that still hold to ancient superstitions, however, they may regard it as a sign of a curse.

Legends have it that some wicked person in history was cursed by the gods for misdeeds. That curse caused them to turn into a ravenous, monstrous beast that preyed upon their own loved ones.

While this curse may or may not really exist, some may mistake a Child of Fenrir to be one of these cursed ones, called a Lycanthrope or Werewolf. This can lead to a  great deal of trouble and misfortune for the Child.

Some stunts that a Child of Fenrir might take may apply only to one form or the other. For example, a stunt that rely’s on a wolf’s claws or teeth would naturally require the wolf form. A stunt that grants a boon for specific artistic skills would require the humanoid form.

Every Child of Fenrir has a spirit of one of the First Pack they carry with them. This is the spiritual remnant of the original pack of ancient wolves that formed around Fenrir and his mate. They teach the Child to speak their ancient language and pass on ancient knowledge — when the spirit deems it is time to do so. They also teach the Child how to hunt and survive, how to change shape, and often specialized skills. They can, in a sense, be thought of as a personification of the natural instinct of Children of Fenrir.

Wolf Senses – Gain a +2 bonus to Notice or Investigate to detect and track based on scent or hearing. You can see very well at night, but not in absolute darkness. Ignore obstacles due to darkness unless there is no light at all, such as deep inside a cave, or the bowels of a castle’s dungeon, but sacrifice some ability to see the full range of colors. This is true for both humanoid and wolf forms. (Yellow/green and orange/red color blindness is typical for both wolves and Children of Fenrir.)

Tooth and Claw — When in wolf form, gain weapon:2 bonus for Fight attacks using teeth or claws. Note that because wolves have no thumbs, they lose the ability to use anything designed for humanoids, such as weapons or tools when taking advantage of this ability.

Agile — The Child of Fenrir can run very quickly, bounding and running faster than most humanoids when in of their quarry. The impressive speed is due to the long, bounding strides they take when running flat out. Gain +2 to Athletics tests having to do with speed-related tasks such as covering ground and chases. This is true for either form.

Aspect of Fenrir — This stunt can be purchased once a character has reached a Great (+4) or higher peak skill and has reached physical maturity. It does not come for free — purchase this with 2 stunt slots or 2 points of Refresh.

Aspect of Fenrir is a special hybrid form a Child of Fenrir can learn to assume when strong enough. There are significant limitations to it, but it provides great benefits in times of need.

This form is a hybrid of wolf and humanoid, adding the two beings as one huge monster. When using the Aspect of Fenrir, the character can move on two legs or all fours, manipulate things that aren’t too small for its huge, clawed hands, and deliver devastating bite and claw attacks.

To activate this powerful form, spend 1 Fate point and take one exchange to transform. When transforming this way, there is no skill roll involved. Aspect of Fenrir grants a terrifying wolf-man form with armor:2, +2 bonus to Fight for attacks with teeth or claws,+2 to Physique for strength-related tasks, and a +2 to Provoke for actions meant to terrify a target. A Child of Fenrir in such a ferocious form has the aspect Easily Provoked with one free invoke on it that can be used against them. Compels against this aspect always result in the character raging at the cause until the cause is gone. Even a minor insult can provoke a rage. Enemies poke the beast at their own peril.

Hello Everyone! As we start our adventures in Elwynor, I encourage all of you to write stories or make comments about your characters! They can be short stories or comments. The can help give others a better insight into your character and add a creative level to the game.